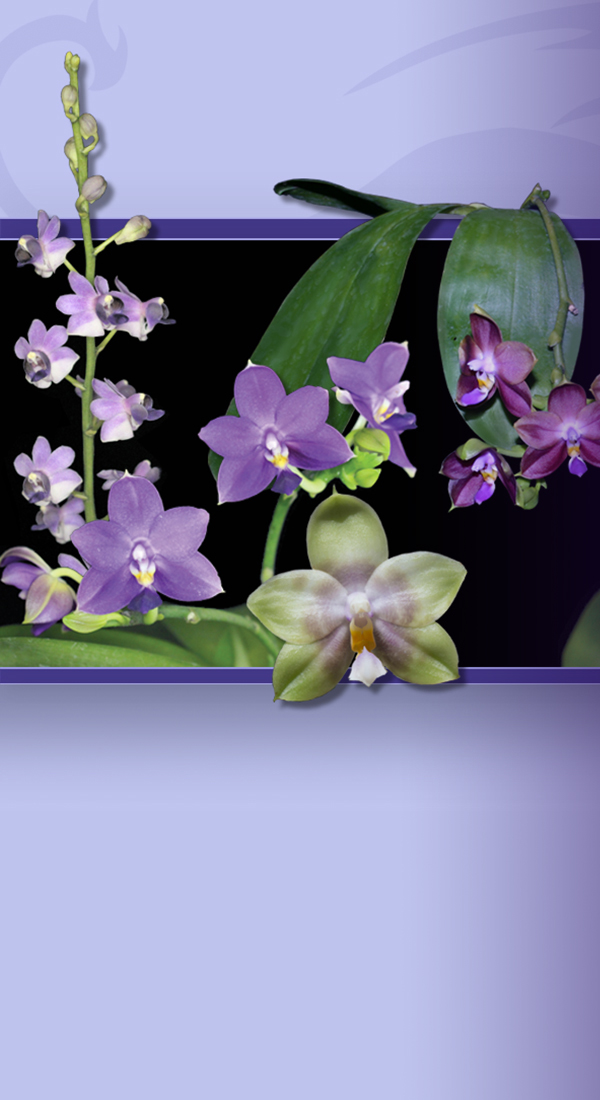 As a smaller boutique grower, we are able stay focused on these special hybrids and limited quantities of quality orchids.  Our crosses and stem props are produced in our own lab giving us the ability to maintain our own quality control from seed to final flowering.  Our operation is now located at Rolling Rock Ranch in the foothills of the San Gabriel Mountains.

Read more about the coerulea color form in this article (The Coerulea Color Form) I wrote with details about this form in Phalaenopsis. 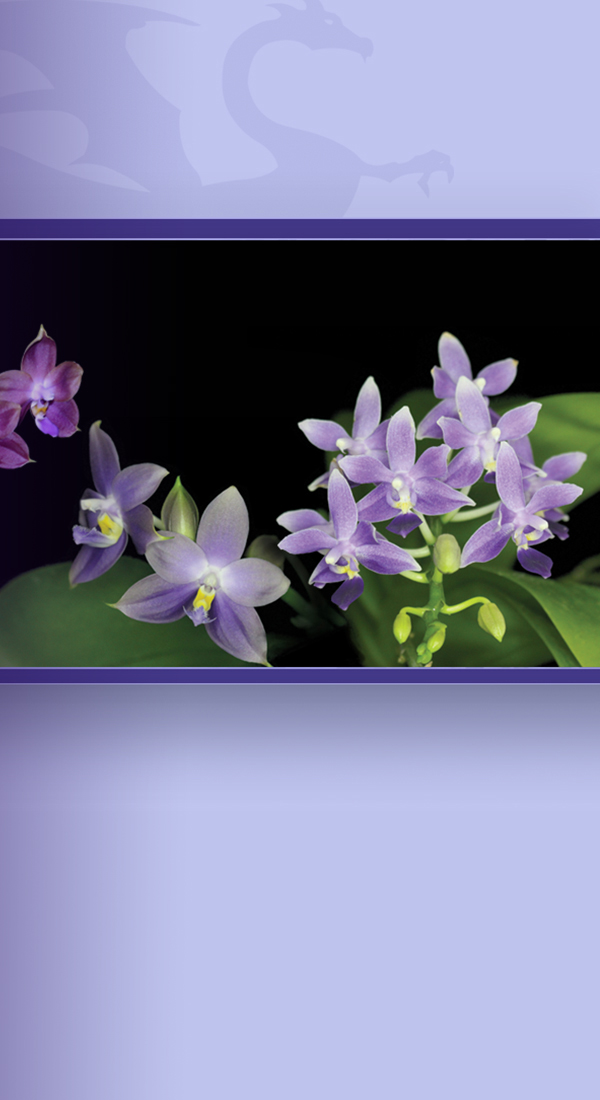 In 2012 we bought our ranch in Canyon Country, Ca.   We did a major greenhouse expansion and started growing the orchid business. Now called Rolling Rock Ranch Heritage Farms, we raise alpacas, chickens, a large organic garden and the orchids.  I still work in entertainment in the computer game industry as an Executive Producer at a major TV/Film company.   So if I'm slow to respond here, I'm probably busy with my day job. 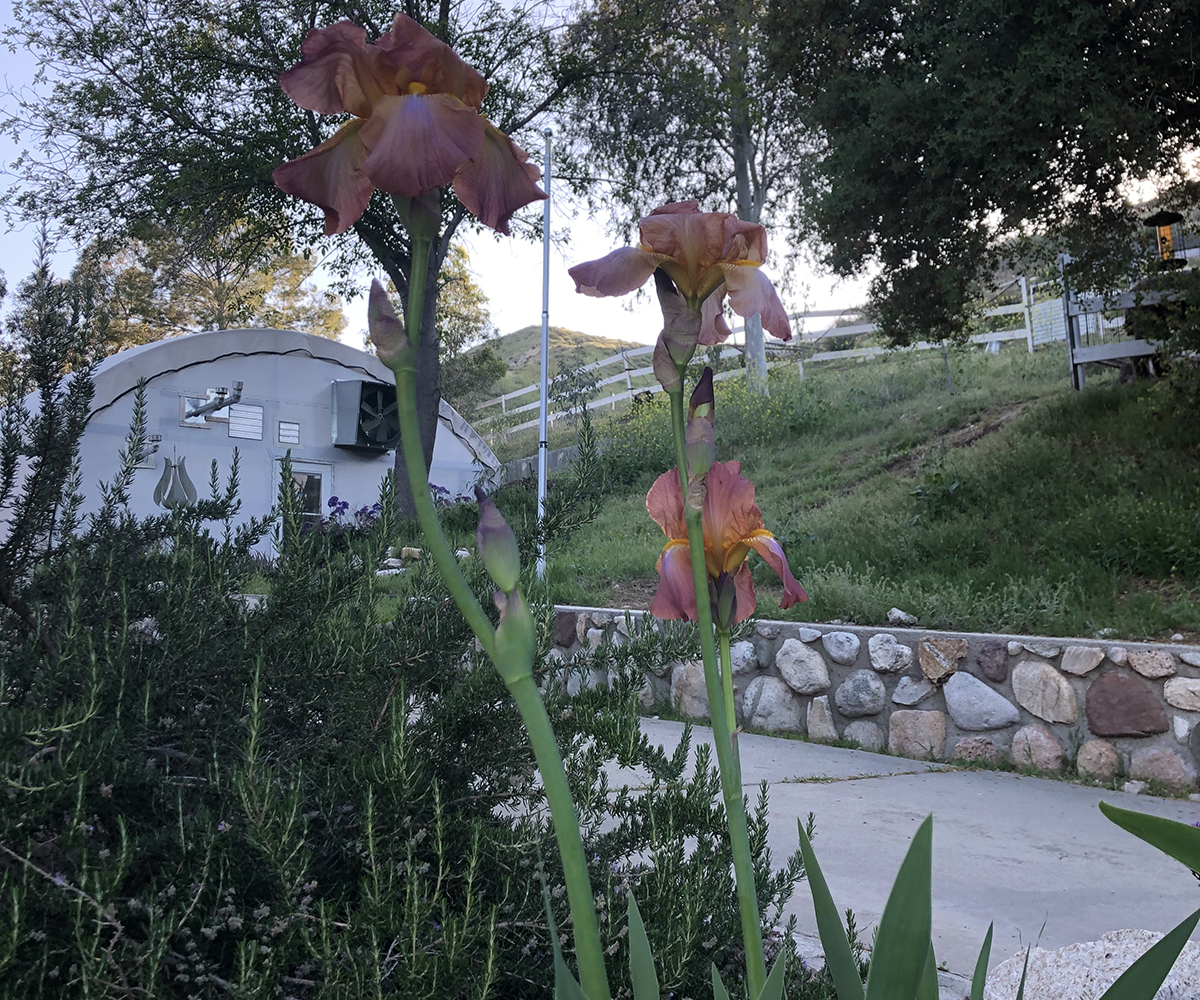 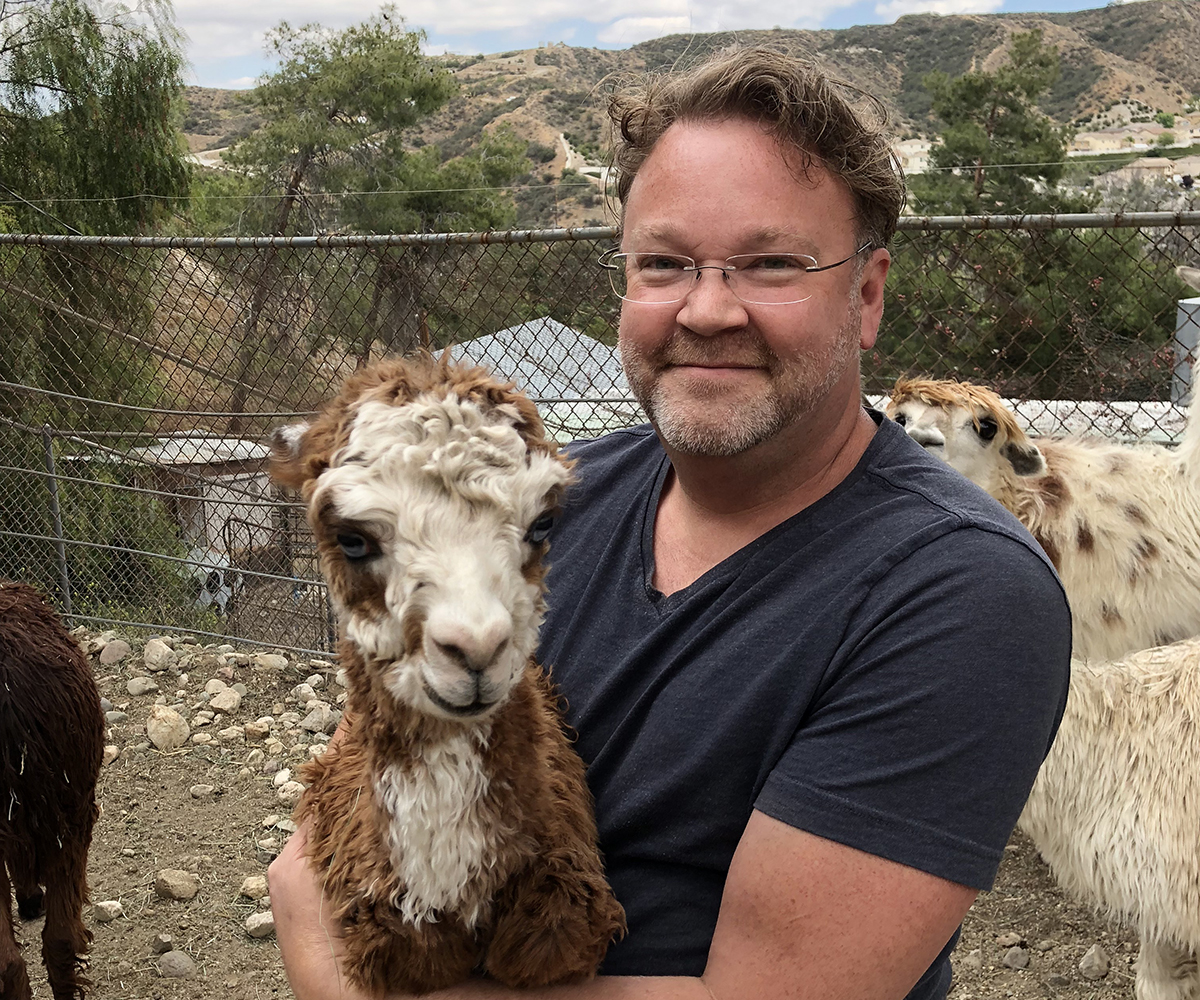 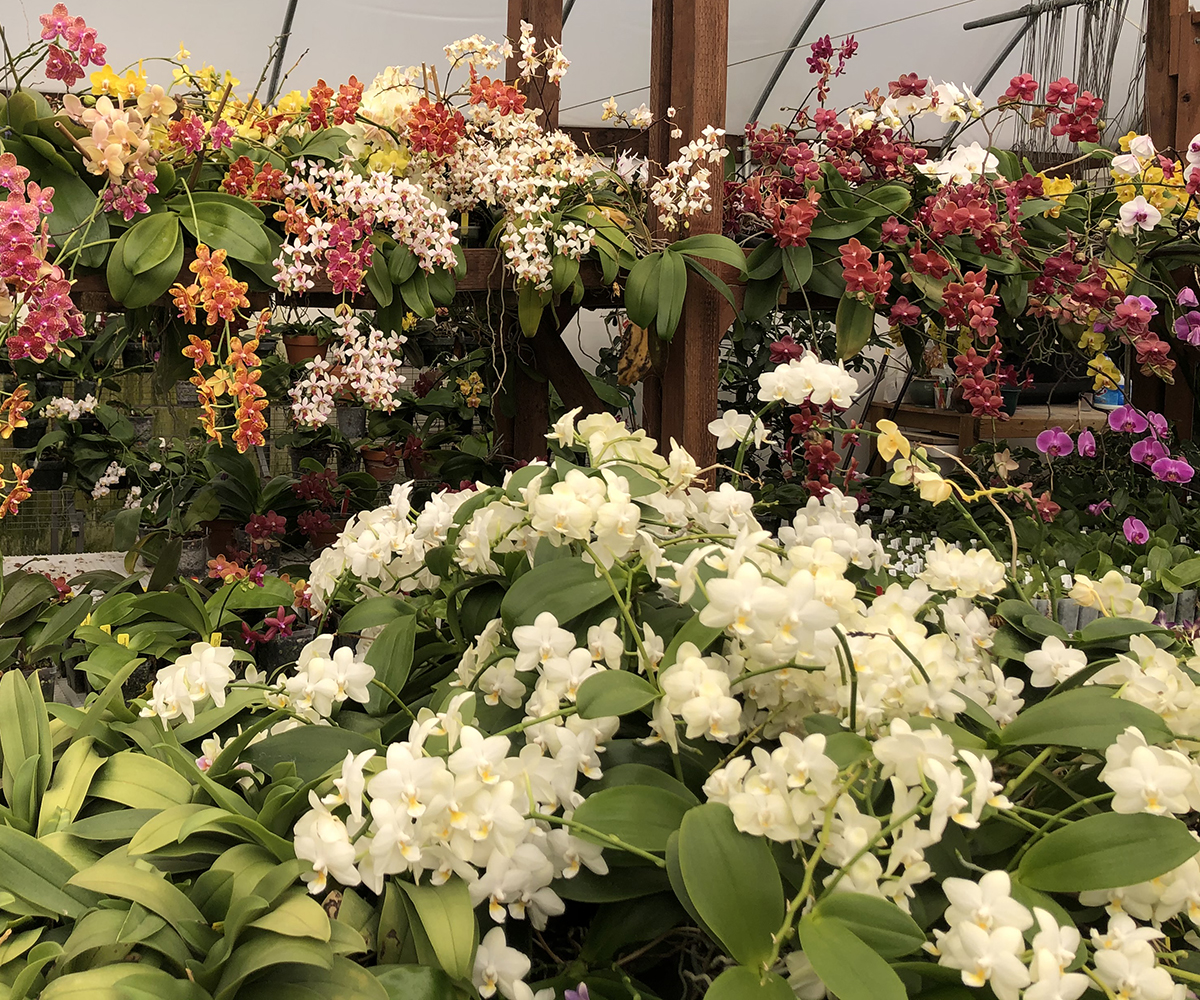 My focus is entirely on coerulea Phalaenopsis breeding.    90% of the crosses that I make are either coerulea hybrids or they are a foundation cross that intended to be used in coerulea breeding.  I also love reds, so I do make a few extra red crosses here are there for fun.

Record keeping is an important part of my hybridizing program.  For ease of use, I have hand written notebook that I use when I pollinate a cross.  Once a seed pod is harvested, all of the information is transferred into a database.  My Orchid Vault was designed over the years to handle all of my record keeping needs. 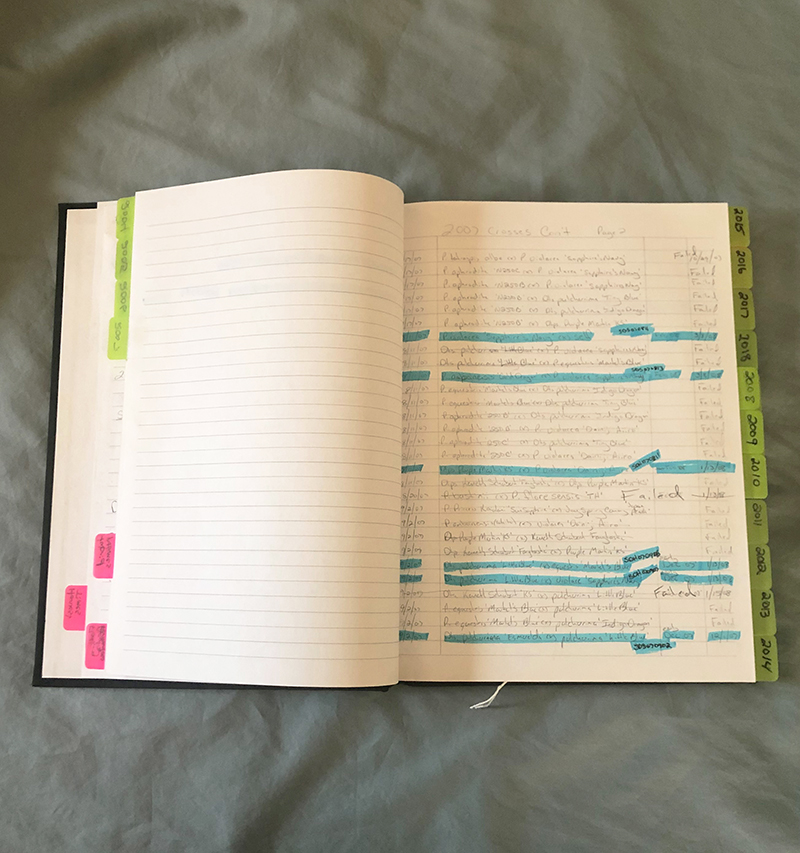 My hybridizing notebook with a page from 2007,

Photography and the Reproduction of the Coerulea Color

Its generally important to note that the blue coloration in orchids is particularly difficult to accurately capture in a photograph. All of our photos are color corrected to match the color of the plant sitting beside a color calibrated monitor. We've had problems in the past with monitors that did not correctl display color. For instance the site was originally designed on a monitor that apparently looked too blue and the interface looked purple on most peoples monitors and also appeared purple in print. So the interface for the entire site was recently updated so that looks as intended on most monitors and prints correctly.

We make every effort possible to display our photos as accurately as possible, but depending on your monitor they may appear different. The interface for this website should appear grey violet to deep violet. 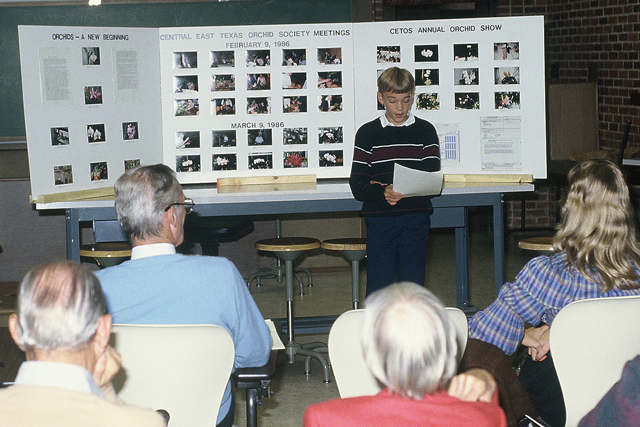 In 1984 I began my addiction with orchids with the purchase of my first Cattleya. Within the year I found other local growers and my windowsill collection grew to 3 orchids. That same year I joined the Central East Texas Orchid Society. Within a very short time I joined the ranks of orchid enthusiasts bearing the orchid fever banner proudly. At the ripe old age of 11, I became the youngest member of our local society and was extremely lucky to find a supportive group of local orchid growers. The following year in May I joined the American Orchid Society. Both my interest in orchids and my collection quickly increased in size and it wasn't long before my growing collection made the move from the windowsill to a greenhouse.

I've been presenting and doing lectures on orchids for over 30 years now.  We have come a long way from having to do standups with printed photos.  ;-)

I was lucky enough to learn the orchid ropes at an early age which served to enhance my instincts. Growing orchids came very naturally to me and I was able to easily grow just about anything from cool to warm growing orchids. I was never one to let anyone else tell me I couldn't grow something and my determination has paid off over the years. I've always grown Phalaenopsis and was specifically attracted to breeding them due the faster time from seed to bloom. I spent many years doing Columbine breeding and was rather spoiled with the 1 year turn around.

Over Twenty years later, I decided I wanted to focus on something different where I could have the opportunity to contribute to a new line of breeding rather than working on incremental improvements along with 100s of other breeders. After growing a few blue phals I completely fell in love with them and started focusing on putting together a solid collection of coerulea stud plants. It has taken about five years to get the foundations plants in place and now I am focused on creating the rest of the foundations plants while also supplementing my collection with line breeding from the few other hybridizers that also focus on coerulea phals.

From here on out you might say I've got the blues and I've found my prozac replacement!

I hope you enjoy the results of my efforts. Some call it compulsion! I like to think of it as creative selectionism. 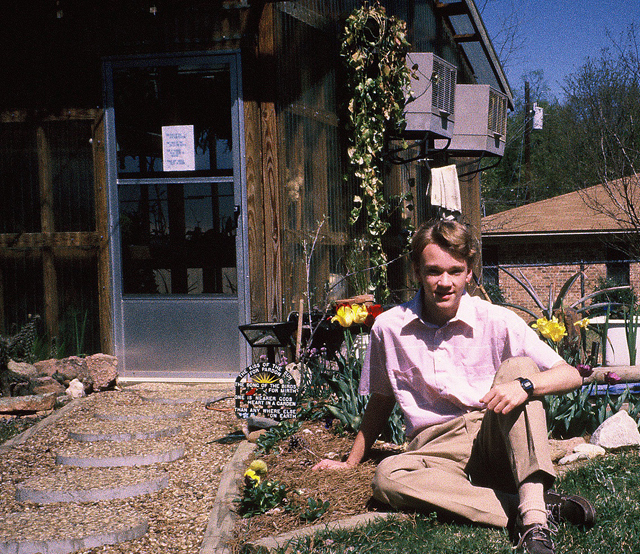